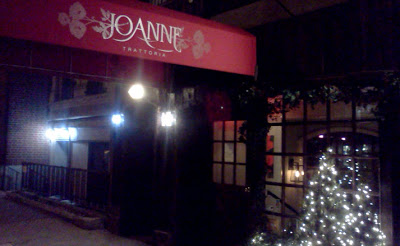 Meat Dresses Not On The Menu To the bemused concern of my friends who live next door, Lady Gaga’s parents have opened a restaurant on the Upper West Side. I snapped the above phone photo on Saturday after dodging a cluster of excited Little Monsters who apparently expect their hero to drop by regularly. Initial reviews have been brutal so we’ll have to see how long my pals will endure goths and teen queens shrieking outside their lobby. The restaurant is named after Gaga’s late aunt, whose date of death is tattooed on the singer’s back.