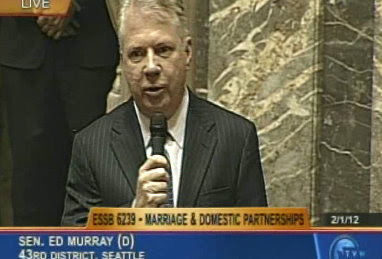 UPDATE: Under the leadership of openly gay Sen. Ed Murray and with the critical support of several Republican Senators, the bill has passed after failed attempts to attach nasty amendments. One of the failed GOP amendments would have made it legal for any business to discriminate against gay couples. Another would have immediately placed the issue on the November ballot. That will likely happen anyway via a public petition drive, but the Democrats swatted it down. Onward to the Washington House, where passage is guaranteed.

Previous Amazon Supports Gay Marriage!
Next I Will Hold You Ten Times