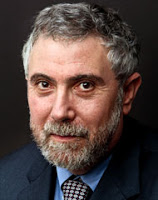 Krugman: The GOP Is Self-Destructing “How did American conservatism end up so detached from, indeed at odds with, facts and rationality? For it was not always thus. After all, that health reform Mr. Romney wants us to forget followed a blueprint originally laid out at the Heritage Foundation! My short answer is that the long-running con game of economic conservatives and the wealthy supporters they serve finally went bad. For decades the G.O.P. has won elections by appealing to social and racial divisions, only to turn after each victory to deregulation and tax cuts for the wealthy — a process that reached its epitome when George W. Bush won re-election by posing as America’s defender against gay married terrorists, then announced that he had a mandate to privatize Social Security. Over time, however, this strategy created a base that really believed in all the hokum — and now the party elite has lost control.” – Paul Krugman, writing for the New York Times.