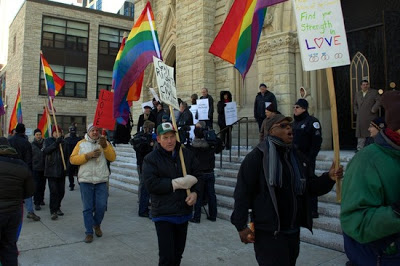 Despite a blistering cold morning, more than 20 LGBT activists protested outside of Holy Name Cathedral Feb. 12, a demonstration held in conjunction with National Freedom to Marry Day. The protest, held every year outside the church around Valentine’s Day, carried special weight this year after Catholic Cardinal Francis George compared the annual Pride Parade to a Ku Klux Klan gathering in December. The pro-gay protesters were greeted by a counter-protest of approximately 10 people on the steps of the Cathedral, who came bearing signs that read “one man, one woman.”

Protesters marched outside the church for more than an hour, chanting “equal rights for everybody” and “stop politicizing love.” “This is not an anti-Catholic demonstration,” said Andy Thayer of Gay Liberation Network, one of the groups that organized the protest. “This is a demonstration against the Catholic leadership.” While some chanted that George was a “bigot” and “archbigot,” others expressed discomfort with the intensity of that message or simply greeted parishioners exiting church rather than chanting.