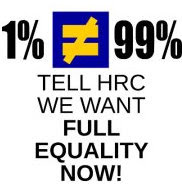 HRC’s Manhattan Gala To Be Occupied A queer contingent of Occupy Wall Street will protest the Human Rights Campaign this weekend outside their black tie Manhattan gala at the Waldorf-Astoria. An excerpt from their press release:

Queer/LGBTIQA2Z Occupy Wall Street, a caucus of the NYC based Occupy Wall Street movement, announced today that it will protest a Human Rights Campaign (HRC) Gala honoring Goldman Sachs on Saturday February 4, 2012 at the Waldorf Astoria. In contrast to the $650 a plate Gala, the Queer/LGBTIQA2Z Caucus will host a “Guerrilla Potluck” on the sidewalk outside of the prestigious hotel at 50th Street & Park Avenue from 5 p.m. to 7 p.m. The Queer Caucus: 1. Condemns HRC for honoring Goldman Sachs, 2. Calls upon HRC to adopt a strategy of Full Equality by 2014, and 3. Demands that HRC create a transparent process that includes the grassroots.

The Queer Caucus points out this demand that elected officials pledge to ensure full federal civil equality by 2014.

RELATED: The HRC used to invite me to cover this event, but I guess they didn’t like what they read.

Previous NOM To Chris Christie: Take Back Your Nomination Of That Anti-Christian Homo
Next Gingrich Won The Rednecks