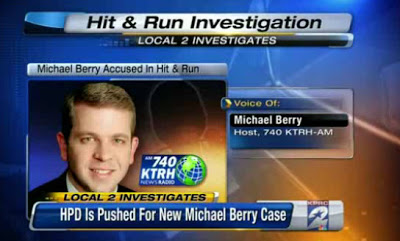 Conservative Houston radio host Michael Berry has been identified on the security videos of a local drag bar shortly before he fled a hit-and-run incident in the club’s parking lot. As I reported yesterday, Berry is known for fiery condemnations of minorities, with “crackheads and welfare queens” his most commonly-used expression to describe Houston’s poor. Berry claims that his employers won’t let him discuss the incident. Some say he fled the scene in order to avoid a DUI arrest, others say he left because he’d been in a gay nightclub.

On his radio broadcast Thursday, which was posted online as a podcast, Berry alluded to the controversy. “I’ve always said when you do what I do, the way I do it, you make enemies. When you poke your finger in as many people’s eye as I do every day, you make enemies,” said Berry. He said that his detractors “will accuse you of most anything” and he added, “You have to trust that in the end, the system works itself out, that there are checks and balances, there are people who will verify. But you also recognize that there are some people who want you to be crushed. There’s some people who hate you. There are some people who privately would benefit from you not being on the air.” He said he does not respond to reporters who question him “on their turf” because it is subject to editing. However, at no point in his broadcast did he deny being behind the wheel and at no point did he address his presence in the club. “You simply cannot go out there and chase down every nasty thing that is said about you. Just because someone says something nasty about you doesn’t make it true,” he said.

Local activists have demanded that the Houston police charge Berry after public outcry that his fame had allowed him to evade investigation.

UPDATE: Berry has deleted his Facebook and Twitter accounts, the latter of which he reportedly used to make homophobic comments about some Grammy performers.

RELATED: In 2008, the then Houston City Councilman Berry claimed to have been carjacked by a band of knife-wielding Mexicans as he departed another nightclub.