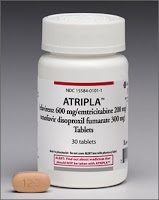 The HIV medication tenofovir has been linked to kidney damage. Sold under the brand name Viread, tenofovir is one of the three drugs in the daily combo pill Atripla, one of the most-prescribed in the anti-HIV arsenal.

Patients who take one of the most widely prescribed drugs to treat HIV infection increase their risk of kidney damage by up to 34 percent every year they take the medication, according to a study of more than 10,000 HIV-positive veterans. “You’re willing to sacrifice a little bit of long-term kidney damage when it’s keeping you alive in the short-term,” said Dr. Michael Shlipak, chief of general internal medicine at the VA medical center and an author of the study. “But as HIV becomes a longer and longer chronic disease, people may be on these drugs for 20 years, and that risk is really going to add up.

Viread is also part of the two-med daily combo pill Truvada, which some are petitioning the FDA to approve as a daily HIV preventive. The controversial AIDS Healthcare Foundation has loudly protested using existing HIV medications as a pre-exposure preventive, citing fears that have apparently been proven by the above-linked study.