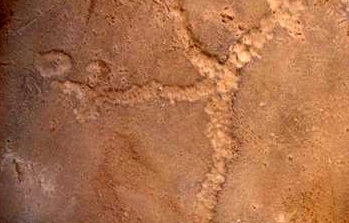 It’s the oldest art yet found in this hemisphere:

A stick figure man with a giant phallus dubbed “the little horny man” by its discoverers is the oldest rock carving found yet in the Americas, researchers say. These findings might shed new light on when the New World was first settled, scientists added. “The figure is probably linked to some kind of fertility ritual,” Neves told LiveScience. “There is another site in the same region where you find paintings with men with oversized phalluses, and also pregnant women, and even a parturition (childbirth) scene.” Carbon dating and other tests of the sediment covering the petroglyph suggest the engraving dates between 9,000 and 12,000 years old. This makes it the oldest reliably dated instance of such rock art found yet in the Americas.