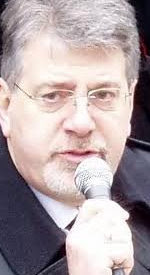 Haters To Sow Confusion In WA As I mentioned here earlier, there may be two anti-gay voter measures on Washington state’s November ballot. But attorney general candidate Stephen Pidgeon claims there is no intent to confuse voters.

The initiative language clearly states that a successful modification of the law would ban homosexual marriage. But while Referendum 74 needs “no” votes and Initiative 1192 needs voters to say “yes,” the attorney does not believe having the two items on the ballot at the same time will cause confusion among voters. “We expect the argument to be explosive, frankly, in the state of Washington,” he predicts. “It could be as much as a $2- million campaign if you add both sides up in terms of the kind of money that’s going to be spent because this is a battle over the soul of the nation, and so we don’t think that confusion is going to be much of an issue.”

Previous The Attack Of The Lesbian
Next MONDAY: Solidarity Rally In Boston