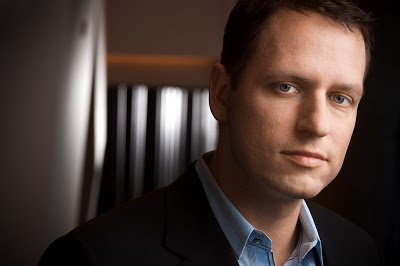 Billionaire PayPal founder and GOProud backer Peter Thiel has been revealed to be the chief money man funding the Ron Paul Super PAC.

Ron Paul revels in the fact that he is the presidential candidate of America’s small donors, receiving more contributions under $200 than any other Republican seeking the White House in 2012. But, like every other GOP presidential contender, he also has a mega-millionaire “sugar daddy” helping to fund a super PAC that is promoting Paul’s candidacy. Yet while Newt Gingrich underwriter Sheldon Adelson and Rick Santorum super-supporter Foster Friess have shared the campaign stage – and the national political spotlight – with their candidates, Paul’s benefactor, San Francisco entrepreneur Peter Thiel, has never met the Texas congressman he’s aiding.

GOProud is thrilled and proud to share Thiel with Ron Paul.

But the Bay Area billionaire is not just a free-enterprise fan. He’s also a proud gay Christian who has supported a wide range of causes including gay rights, freedom of the press, antiaging research and artificial intelligence. He’s funded a “seasteading” foundation that wants to create artificial, self-governing islands some 200 miles off the California coast to serve as experiments in innovative political, social and legal systems. “He has great insight,” said Jimmy LaSalvia, executive director of GOProud, a group of gay conservatives that has received fundraising help from Thiel and conservative commentator Ann Coulter. “He also is inquisitive, and most of the conversations I’ve had with him have been him asking questions. He gathers a lot of information.”

Thiel has authored an anti-diversity book which claims that America’s downfall began when women got the vote. His “seasteading” project intends to create floating city-states that are exempt from international law, taxes, banking regulations, and employment protections.