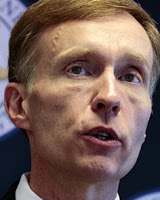 Levinson will be headed back to court by February 27 over McKenna’s proposed R-74 language, which she calls “not as balanced and clear as we would like it to be.” Meanwhile, the state Democratic Party is accusing McKenna of “misusing his public office to advance his discriminatory views on marriage equality” via these ballot language recommendations. For example: The phrase “redefine marriage” does not appear once in the gay-marriage bill signed into law by Governor Chris Gregoire on February 13. And referenda—which by definition ask voters to “approve” or “reject” a bill passed by the legislature—are supposed to have ballot language that hews very closely to the language of the actual bill in question. Yet McKenna, who knows this, comes up with “redefine marriage”?

In the above-linked piece, Slog writer Eli Sanders notes that anti-gay groups are actually trying to place TWO anti-marriage items on the November ballot. One would repeal the same-sex marriage bill and the other would limit marriage to “one man-one woman.” The reason? They want to create “voter confusion.” The pro-gay side would have to vote YES on one bill and NO on the other.