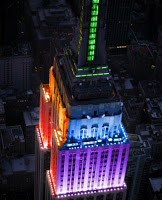 Not only did the “anti-Catholic” owners of the Empire State Building rebuff demands to turn blue and white in honor of Mother Teresa, they’ve now refused a similar request to light the landmark red in honor of the elevation of Cardinal Timothy Dolan. Bill Donohue will be ever so pissed.

The Empire State Building Company responded Thursday with a resounding “No.” “After careful consideration of your proposal, unfortunately, the decision has been made to deny your request,” the rejection letter read. He said the building traditionally lights up every year for the religious holidays of Easter, Eid al Fitr, Hanukkah, and Christmas, but he draws the line there. “[The building] has a specific policy against any other lighting for religious figures or requests by religions and religious organizations,” wrote Malkin.

Among the more whimsical ESB lightings was when the building went green to celebrate the 25th anniversary of the Teenage Mutant Ninja Turtles. And the building always turns a lovely shade of lavender during the last weekend in June. Except for last year, when the pictured tribute to same-sex marriage made its debut.

Previous Teen Records His Coming Out
Next Meet And Seat