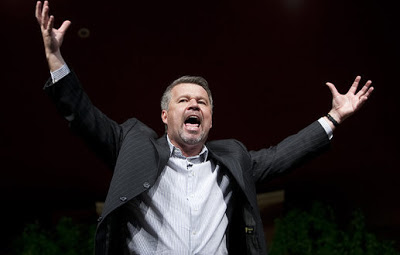 A coalition of anti-gay Christian groups headed by Pastor Tom Brown (above) has lost their bid to recall El Paso Mayor John Cook over the domestic partners insurance provision he ordered reinstated. The reason that the haters lost? They cheated.

The Eighth Court of Appeals on Friday unanimously ruled that the recall group had violated the law in its petition drive. The court ordered Municipal Clerk Richarda Momsen to decertify the recall petitions and ruled that no recall election using them can be held. The order states, “Having instructed the City Clerk to decertify the petitions, no election thereon may be called or held.” The court also ruled that County Court 3 Judge Javier Alvarez abused his discretion in denying Cook’s request for an injunction. “The trial court was required to apply the law to the facts. We find the trial court failed to do so here,” the order states. Pastor Tom Brown, Word of Life Church and others are trying to recall Cook and City Reps. Susie Byrd and Steve Ortega because all three officials voted to restore health benefits for gay and unmarried partners of city employees after voters passed a ballot initiative in November 2010 repealing them.

The 2010 ballot initiative was so badly worded that it not only rescinded domestic partners provisions, it ended such benefits for retired police and fire department employees.