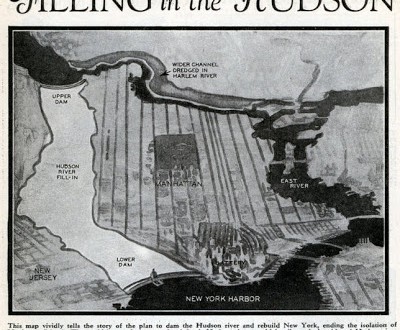 The Cure For Bridge & Tunnel If the above 1934 plan had come to fruition, I guess West Chelsea would also be called East Hoboken. From a news article at the time:

In keeping with the Norman Sper plan, the ten square miles of land which would thereby be reclaimed from the Hudson would not only provide for thousands of additional buildings, but also for avenues and cross streets which would greatly relieve the congestion in present thoroughfares. Today there are ten avenues laid out along the length of Manhattan. These are crossed by 125 streets. It is the lack of up-and-down arteries which has given rise to the existing traffic crisis. Sper would double the number of avenues. His suggestions go still further. No use waiting, he says, until the entire area is filled in before starting underground improvements. Build your tunnels, conduits, mail and automobile tubes, and other subterranean passages indispensable to comfort in the biggest city in the universe as you go along. Do it in the process of filling the basin left by the drawing off of the water.

Previous Billboard Of The Day
Next Tweet Of The Day