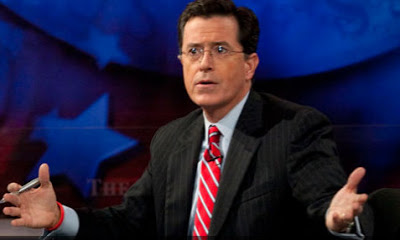 Twitter is buzzing with curiosity over the abrupt and as yet unexplained suspension of the Stephen Colbert Report by Comedy Central.

“Due to unforeseen circumstances, the show will air repeat episodes on Wednesday, February 15 and Thursday, February 16,” Comedy Central Senior VP for Communications Steve Albani told POLITICO. Albani would not comment on the specific reasons for the suspension, saying Comedy Central was “not providing any additional details at this time.” According to Third Beat Magazine, which covers comedy, the Colbert Report’s audience received a notification email announcing the cancellation of live taping.

Seems like if this was a health issue, they’d say so.

UPDATE: The Wall Street Journal has the story.

Stephen Colbert has suspended production of his satirical comedy show temporarily because of an emergency in Mr. Colbert’s family, according to people familiar with the show. “The Colbert Report” is expected to resume production soon, perhaps as early as next week, the people added. Comedy Central, the Viacom Inc. network that airs the show, had stoked speculation about the fate of “The Colbert Report” when it issued a cryptic statement canceling the tapings of the show scheduled for the remainder of this week.