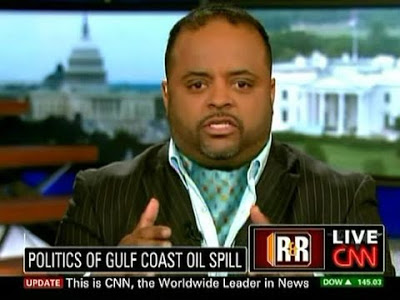 CNN has suspended political commentator Roland Martin after GLAAD and other gay activists denounced his Super Bowl tweets which appeared to endorse violence against unmasculine men. Martin has since blogged an apology, but apparently that wasn’t enough. CNN’s move has already ignited a firestorm of “Christian oppression!” screams on Twitter. Martin has not yet responded to today’s news on his Twitter account, but he has approvingly retweeted at least one anti-gay account of the Prop 8 ruling. Martin’s wife is involved in the “ex-gay” movement.

“To those who construed my comment as being anti-gay or homophobic or advancing violence, I’m truly sorry. I can certainly understand how someone could come to a different conclusion than the one I meant. I’m disheartened that my words would embolden prejudice. While public debate over social issues is healthy, no matter which side someone takes, there is no room for debate as to whether we need to be respectful of others. Violence against gay people or against any other minority isn’t a political opinion.”

CNN took its time, but it clearly reached a strong decision here. What Martin had tweeted — advocating beatings for men who’d enjoyed the David Beckham underwear ad shown during the Super Bowl plus the same for a New England Patriot clad in a pink suit — was the equivalent of cheerleading for violence against gays.

“Roland Martin’s tweets were regrettable and offensive. Language that demeans is inconsistent with the values and culture of our organization, and is not tolerated. We have been giving careful consideration to this matter, and Roland will not be appearing on our air for the time being.”

“CNN today took a strong stand against anti-LGBT violence and language that demeans any community,” said GLAAD spokesperson Rich Ferraro. “Yesterday, Martin also spoke out against anti-LGBT violence. We look forward to hearing from CNN and Roland Martin to discuss how we can work together as allies and achieve our common goal of reducing such violence as well as the language that contributes to it.”

UPDATE V: According to Martin’s wife, the LGBT rights movement has stabbed blacks in the back after “using our history to gain their equality.”