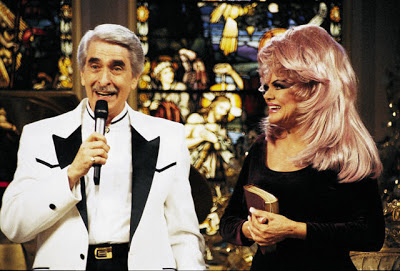 The world’s largest Christian television network, Trinity Broadcasting, has been accused of funneling $50 million in viewer donations to the company’s directors. Freak show televangelists Paul and Jan Crouch (above) are the global faces of the network.

The charges are leveled in a federal lawsuit filed by Crouch granddaughter Brittany Koper last week against her former lawyers, who also do legal work for TBN. “Observers have often wondered how the Crouches can afford multiple mansions on both coasts, a $50 million jet and chauffeurs,” said Tymothy MacLeod, Koper’s attorney. “And finally, with the CFO coming forward, we have answers to those questions.” Koper had served as chief financial officer, director of finance, corporate treasurer and director of human resources for Trinity Christian Center of Santa Ana, which does business as Trinity Broadcasting Network, according to the suit. Koper’s complaint is not directed against her grandparents or TBN – but against the two attorneys who handle some TBN legal work, and who once worked for Koper herself. She accuses them of professional negligence, breach of fiduciary duty and other transgressions in the suit.

RELATED: In 2010 Paul Crouch Jr., the son of the network’s founder, was forced to settle a sexual harassment suit filed by a gay male employee who claimed that Crouch had taunted him with female pornography and had told co-workers that he has a “mangina.” The details of that settlement were not made public. In 1994 the network paid a settlement of $425,000 to a man who claimed that he was forced have sex with Paul Crouch, Sr. in order to keep his job.