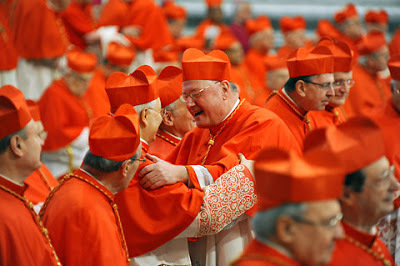 New York Archbishop Timothy Dolan was elevated to Cardinal at the Vatican this morning, joining the other 125 Cardinals under the age of 80 who will vote on the next Pope when Emperor Palpatine finally keels over. Dolan’s American entourage in Rome includes a reported throng of over 1000 fans, friends, and family, plus news crews from most of New York City’s major media outlets.

Meanwhile, back in Dolan’s former Milwaukee diocese, the investigation continues into the alleged 8000 incidents of child molestation that were hidden from the authorities. Dolan is suspected by some to have moved over $130M in diocese assets in order to protect them from being seized by court settlements in other molestation cases. The Milwaukee diocese is now claiming bankruptcy. Right.