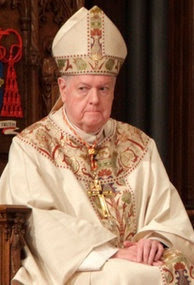 Cardinal Edward Egan has withdrawn his apology for the child molestation scandals that were exposed when he was the Archbishop of New York. That 2002 letter of apology was read to all of the congregations under his control.

A decade after that letter, the former archbishop of New York, and former bishop of Bridgeport, now describes the handling of the priest-abuse crisis under his watch as “incredibly good.” He said of the letter, “I never should have said that,” and added, “I don’t think we did anything wrong.” “I never had one of these sex abuse cases.” he said, before adding pompously, “If you have another bishop in the United States who has the record I have, I’d be happy to know who he is.”

He also claimed that the Church had no obligation to report abuse to the civil authorities. These are lies, strutting around with pride. The Church is required to report abuse, according to laws on the books since the 1970s. Bishop Egan ran a diocese that was notoriously dangerous for children. Contrary to his claim, during his twelve-year enthronement at Bridgeport, Egan repeatedly failed to investigate priests where there were obvious signs of abuse, according to The Hartford Courant. His diocese had to settle the cases and awarded victims some $12-15 million in damages.

In 2009 Egan was succeeded by Archbishop Timothy Dolan, who himself is about to be elevated to Cardinal. Like Dolan, he is a vocal opponent of LGBT rights.

Previous CNN Suspends Roland Martin
Next Frothy Gets Pissy About Prop 8: The Court Is Calling All Of Us Bigots And Haters