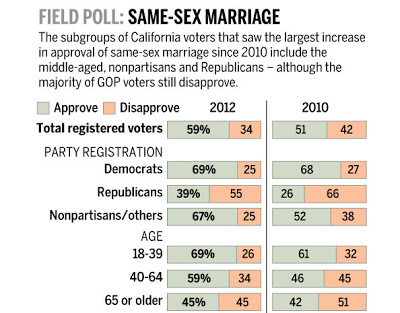 The new Field survey shows support has leapt markedly in the three and a half years since California voters approved Proposition 8, which banned gay marriage, 52.3 percent to 47.7 percent. The poll showed increases in support virtually across the board – among voters under 64, non-white voters, Catholics, Republicans and nonpartisans. Poll Director Mark DiCamillo said the move to a 25-point gap goes beyond the gradual increase in support that has been expected as young voters age and “replace” older voters in the electorate. “This is now showing that opinions are changing irrespective of generational replacement,” DiCamillo said. “This is real change.”

I wonder if Equality California is kicking themselves right now.