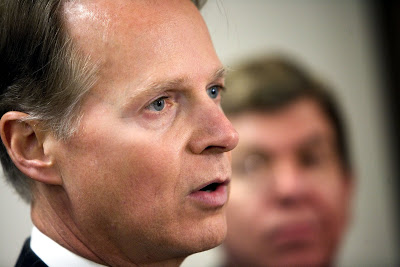 Rep. David “Closet Case” Dreier (R-CA) will not seek reelection to the U.S. House this fall.

Veteran Rep. David Dreier, one of California’s most influential Republicans in Congress, announced Wednesday that he won’t be running for reelection, perhaps the biggest casualty of the state’s first-ever citizens-drawn political map, which cast him into a politically inhospitable district. Dreier is the sixth California House member to announce his retirement when his term expires, further shaking up a delegation that has built up clout on Capitol Hill because of its stability over the years. Dreier, chairman of the House Rules Committee, made the announcement on the House floor, citing Congress’ “abysmally low approval rating.” “The American people are asking for change in Congress,” he said.

Dreier was outed by LA Weekly in 2004 when the newspaper revealed that he had a “romantic relationship” with his own chief of staff. Dreier voted for DOMA, against gay adoption, and against the Hate Crimes Act. He has a 20% rating from the HRC, mostly due to his last minute vote for the repeal of DADT. Dreier has never responded publicly to questions about his sexual orientation. He is a pig. Bye bye piggie.