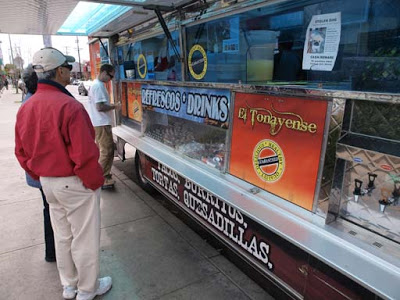 The California Assembly is considering a bill that would ban food trucks from parking within 1500 feet of a public school. Opponents argue that such a quarter-mile rule would effectively ban the trucks from densely-populated cities like San Francisco.

The state law applies to elementary schools as well as middle schools and high schools, and that doesn’t make sense,” Wiener says. “I don’t know any elementary schools that allow their students to leave campus for lunch — and there are many more elementary schools in town.” Just to give you a sense of what we’re talking about, 1,500 feet is about three city blocks. “We’re having a map drawn now,” Wiener adds, “but it looks like [expanding the limit to] 1,500-hundred feet from all schools would knock out the bulk of the city from having access to food trucks.” Off the Grid organizer Matt Cohen adds that San Francisco’s ordinance only covers food trucks parked on the street, while the proposed state legislation is written loosely enough that it might cover private property and parks as well.

RELATED: As I’ve mentioned recently, Manhattan has seen an explosion in the number of food trucks over the last year, much to the outrage of many restauranteurs. Right now there are probably a dozen or so trucks parked at the end of my block to serve the subway construction workers and the tens of thousands of employees on Bedpan Alley.