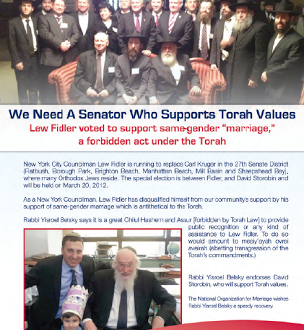 The National Organization for Marriage has taken its anti-gay marriage efforts down to a local level, purchasing advertisements in the special election to replace former State Senator Carl Kruger. A reader found one of these ads in the Orthodox Jewish publication Country Yossi Magazine. “We Need A Senator Who Supports Torah Values,” the ad’s headline reads, before going after the Democratic candidate. “Lew Fidler voted to support same-gender ‘marriage,’ a forbidden act under the Torah.”

NOM is working with Jews For Morality, the outfit headed by the vile Rabbi Yehuda Levin, the douchebag who claims that God murders children in anger over gay marriage. Yehuda has issued a religious edict against voting for any supporters of LGBT rights, saying that such an act is a “willful violation of Torah law.”