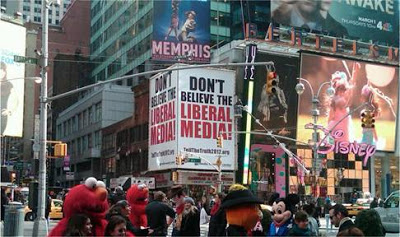 The anti-gay Media Research Center has posted the above billboard in Times Square.

“There is no better location for this billboard than the liberal media’s own backyard,” said MRC President Brent Bozell in a statement. “We promised this 2012 campaign would be the most expansive, most exhaustive and consequently the most expensive operation in our 25 years. We will keep that promise because this is the most important election in our lifetime and the American people are sick and tired of the left-wing media deciding who will govern our country.”

You may recall Brent Bozell from his recent national television appearance when he announced that President Obama looks like a “skinny ghetto crackhead.”