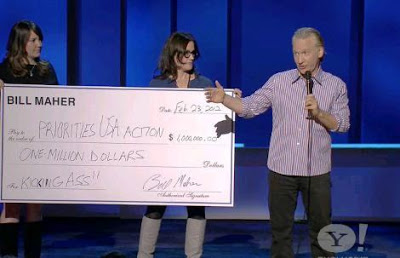 Bill Maher has made a $1M donation to a super PAC backing the Obama campaign.

He made the announcement at the end of his hour long special which streamed live on Yahoo on Thursday, saying “I would like tonight to announce a donation to the Obama super PAC, which has the very unfortunate tongue-twister name Priority [sic] USA Action. I know, it was named by Borat. But tonight, I would like to give that PAC one million dollars.” Maher told viewers that he felt an Obama victory over any of the Republican candidates would be “worth a million dollars,” saying that the donation was “the wisest investment I think I could make,” before encouraging other wealthy people to do the same.