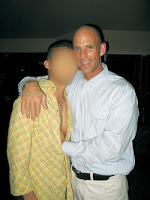 ARIZONA: Anti-Immigrant Sheriff Accused Of Threatening To Deport His Boyfriend Pinal County Sheriff Paul Babeu is considered Arizona’s second-most virulently anti-immigrant law enforcement officer after Maricopa County’s infamous Sheriff Joe Arpaio. That’s why jaws are dropping over a claim that not only is Babeu gay, but that he once threatened to deport his Mexican boyfriend. That’s probably gonna cause a wee bit of trouble for Babeu’s run for Congress.

The 34-year-old from central Mexico charges that the sheriff’s lawyer warned against mentioning the affair with Babeu. DeRose said gossip about Babeu would focus attention on Jose, attention that could result in his deportation, Jose says. Melissa Weiss-Riner, Jose’s attorney, confirms her client’s account. She says she spoke directly to the sheriff’s lawyer, DeRose, about the Babeu camp’s threats that Jose could be deported if he “revealed the relationship.” She says DeRose falsely claimed that Jose’s visa had expired. “Jose came to our firm because he felt he was being intimidated, and he was in fear for his life,” Weiss-Riner says. “He wanted his legal rights protected.”

It’s a long story complicated with confidentiality agreements, internet tomfoolery, and Babue’s alleged Adam4Adam profile. Read the entire article. You may recognize Paul Babue from his occasional appearances on Fox News and from his role in John McCain’s “Complete The Danged Fence” commercial.

(Tipped by JMG reader Homer)
UPDATE: Babeu has come out.

Arizona GOP congressional candidate Paul Babeu acknowledged Saturday he is gay but forcefully denied charges he threatened an ex-lover with deportation after their relationship soured. “All of the allegations are false except one, I am gay,” Babeu said. The nationally renown Pinal County Sheriff called a news conference to address the explosive story by The Phoenix New Times that he pressured a man only identified as “Jose” into signing an agreement to conceal their relationship or face deportation. The piece, posted late Friday, also includes text messages Babeu exchanged with the man and pictures he posted on online gay websites. Babeu repeatedly sidestepped questions about his personal life but acknowledged a relationship with the man in question. “What I do in my personal life and private life is my business,” he said.

After coming out, Babeu stepped down as Arizon co-chair of the Romney campaign, but says he will still pursue a seat in Congress. Have we had an open homocon in Congress yet?

Previous Skrillex – Bangarang
Next Headline Of The Day