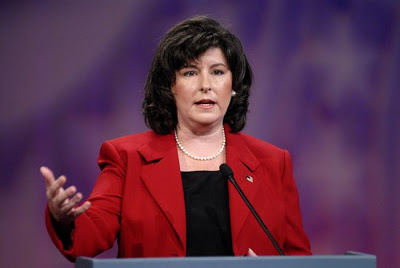 “I am deeply disappointed by the gross mischaracterizations of the strategy, its rationale, and my involvement in it. I openly acknowledge my role in the matter and continue to believe our decision was the best one for Komen’s future and the women we serve. However, the decision to update our granting model was made before I joined Komen, and the controversy related to Planned Parenthood has long been a concern to the organization. Neither the decision nor the changes themselves were based on anyone’s political beliefs or ideology.”

RELATED: About Handel’s anti-gay past….

“I’ve been very clear. And you know, as a Christian, marriage is between a man and a woman. I do not think that gay relationships are — they are not what God intended. And that’s just my viewpoint on it. Others might disagree with that. But I would also hope that if you look at what is happening in our state, we’ve got issues we need to be focused on in Georgia. We have a constitutional amendment against gay marriage. And it’s something that I supported wholeheartedly. I am against gay adoption. Do I think that gay parents is in the best interest of the child? No.”