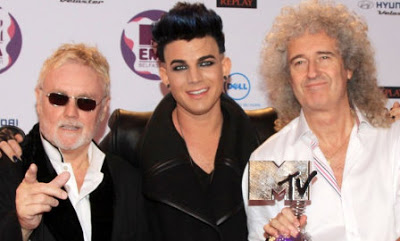 Speculation began last year and now there might be some news, if you believe one British tabloid.

Freddie Mercury’s place will be taken by Adam Lambert, the American Idol winner. He wowed fans by singing with original members Brian May and Roger Taylor at MTV’s EMAs in Belfast last November. Adam told me he can’t wait to sing with guitarist Brian, 64, and drummer Roger, 62. The flamboyant 30-year-old revealed: “The intention is to pay tribute to Freddie and the band by singing some fuckingg great songs. It’s to keep the music alive for the fans and give it an energy that Freddie would have been proud of.” Sonisphere’s line-up, which also includes metal veterans Faith No More, tours Europe before hitting Knebworth on July 6-8, scene of Queen’s final gig with Freddie in 1986. Adam enthused: “After the EMAs, I heard faint little slithers of a backlash from people saying: ‘You can’t replace Freddie Mercury.’ But I already knew that. “There’s no intention in my mind of replacing Freddie. That’s impossible. “The way I’m choosing to view it is that it’s a great honour and one I’m in no way going to shirk.”

One suspicious mistake in the linked source is that Lambert did not win American Idol, he was runner-up. So we’ll see….