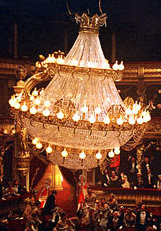 Phantom Of The Opera had its 10,000th Broadway performance yesterday.

While “Phantom” has prospered from unparalleled word of mouth, a show as much for sightseers as for theatergoers, its unprecedented Broadway run has hardly been a foregone conclusion. When it opened on Jan. 26, 1988, big hits were few, and roughly half of Broadway’s theaters were empty. Yet thanks to persistent marketing, strict quality control and flexibility in ticket pricing (the worst seats can now be had for only $26.50), “Phantom” survived — in fact thrived — when shows with bigger stars and better reviews brought down their curtains. The show’s 2011 box office performance was its most lucrative, and in December “Phantom” earned more in a single week, $1,579,428, than in any of the 1,256 weeks since the musical reached New York.

I’ve never seen Phantom but I did at least get to sit in that gorgeous theater during Bea Arthur’s memorial tribute.