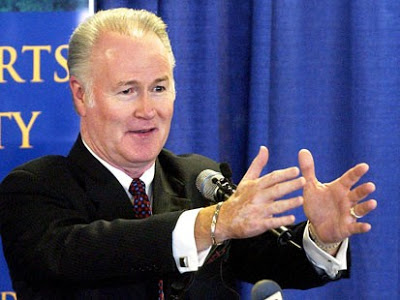 Televangelist Richard Roberts, the son of Oral, has been busted for DUI.

Richard Roberts, 63, was stopped by the Oklahoma Highway Patrol just after midnight after a trooper observed him traveling at about 93 mph on a turnpike in his Mercedes-Benz sedan, according to an arrest report. The speed limit on the road is 65 mph, the report said. The trooper “detected the strong odor of an alcoholic beverage about Roberts’ breath and person,” the report said, and Roberts failed field sobriety tests. Roberts consented to a breath test, which showed his blood alcohol level at .11%, higher than the .08% limit for legal intoxication. He was booked into the Tulsa County Jail.

In 2007 Roberts was forced to step down as president of the university his father founded after several lawsuits were filed alleging embezzlement of school funds. He continues to make over $500,000 annually from the school and hosts a nationally syndicated television scam.

Previous Concerned Women Are Concernstipated About Gay Marriage In Washington
Next Why Does The Left Hate Gay People?