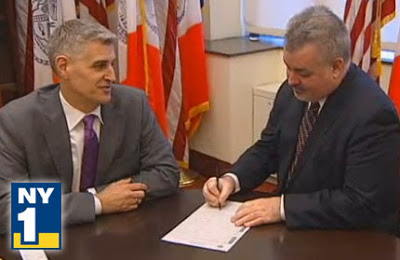 Yesterday New York Assemblyman Daniel O’Donnell and his partner John Banta finally got their marriage license after 31 years together. As has been well documented on this blog, O’Donnell is one of the chief architects of marriage equality in New York, having led his chamber to approve the issue in three consecutive years.

O’Donnell and Banta were at the City Clerk’s office in Downtown Manhattan on Wednesday to obtain their marriage license, but the ceremony and reception will be a much more elaborate affair taking place on Sunday. The guest list reads like a who’s who of New York politics and invitations have gone out to more than 400 guests. “I invited almost all of the members of the Assembly and almost all the members of the Senate who voted yes to come to my wedding, which, when you add their spouses, that’s a lot of people,” said O’Donnell. “So they were invited, and most of them are coming.” Senators Charles Schumer and Kirsten Gillibrand are expected, as is former Governor David Paterson; Cuomo cannot make it. Judith Kaye, the state’s former chief judge, will officiate.

O’Donnell represents Manhattan’s Upper West Side. In lieu of a wedding gift, how about a donation to his 2012 campaign?

Previous FRC Bemoans Marriage Advances
Next You Are Here