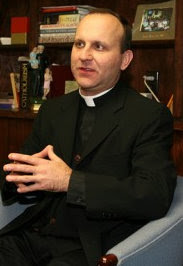 The Archdiocese Of Hartford wants all of you dirty homos to stop that delicious man-fucking. If you stop it right now, Jeebus and all those other white people in heaven will forgive you.

The Hartford Archdiocese wants gays and lesbians to practice abstinence in the new year. On Tuesday, the archdiocese announced it was launching a local chapter of a national ministry called Courage “to support men and women who struggle with homosexual tendencies and to motivate them to live chaste and fruitful lives in accordance with Catholic Church teachings.” In a press release, the archdiocese stated that its Office of Diaconate director, Robert Pallotti, had been working to establish an area program for more than four years. The Courage ministry is based in Norwalk, led by the Rev. Paul Check of the Bridgeport Diocese, and claims to have more than 100 chapters around the country. Gay attraction is not the sin, the ministry preaches — only when one acts on those feelings is it immoral.

You can still be gay, you just can’t, uh, BE gay. Or something!

Previous Headline Of The Day
Next Surprised By A Frothy Mix