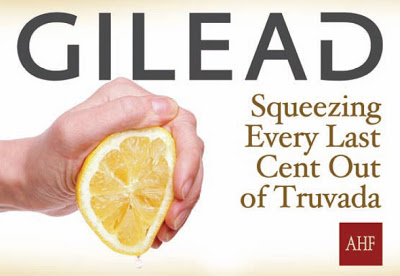 The controversial AIDS Healthcare Foundation has launched a publicity campaign in opposition to classifying Truvada as a daily preventive (PrEP) for HIV infection. Last week a large coalition of AIDS groups issued a call for the FDA to make the change. Via AHF press release:

“It appears that Gilead is trying to ram expanded use of Truvada as an HIV prevention pill through the FDA approval process—despite serious concerns about the drug’s safety and effectiveness,” said Michael Weinstein, AHF President. “Employees and the public should know that the multi-billion dollar profit Gilead is currently making on Truvada as an HIV treatment medication is not enough for them—Gilead now has its eyes on the billions of dollars that can be made by selling HIV drugs to people who don’t even have the disease. We see this is an act of desperation to protect Gilead’s unsustainably high profits from Truvada, which will go off patent in the next few years. Gilead knows it doesn’t have the pipeline to replace this blockbuster AIDS treatment, so it’s doing everything it can to squeeze out more profit—even if that means putting healthy people at risk.”

The AHF’s campaign includes sending the above postcard to about 50,000 homes in the Bay Area region that is home to Gilead’s headquarters. The same image will appear as a “sticky-note” on copies of the San Jose Mercury-Tribune.