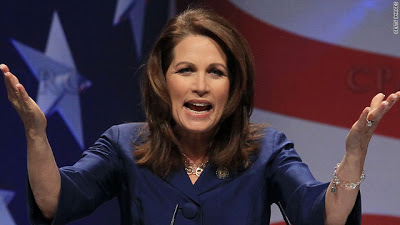 “I hold a biblical view of law. If you look at the original constitution and the founding documents of our country, it was clear that the founders wanted to separate power, they wanted to separate the presidency from the Supreme Court and from the Congress, because they thought that the Congress should be the most powerful of all the people’s voices because the people would have the ability to change out the members of the House every two years, originally the state legislatures would chose the Senators and they would have the state’s interest in mind, and the President was meant to execute the laws that Congress would put into place. The courts had a relatively minor function, it was to take current facts and apply it to the law that Congress had passed. So it was really a beautiful system that set up but it’s been distorted since then, and that’s what we need to do, get back to the original view of the Founders because it worked beautifully.” – Michele Bachmann, promising to gut the federal judiciary.