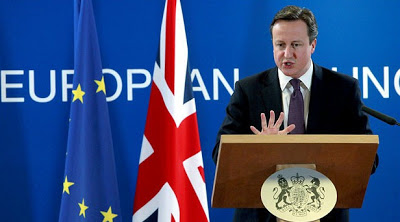 British Prime Minister David Cameron has refused to sign on to the just-struck pact to save the Euro. All 17 nations that use the Euro have signed on.

Cameron said Britain refused to sacrifice sovereignty to save the euro, remaining outside an agreement by European nations to tighten budget rules. Cameron broke ranks with French President Nicolas Sarkozy and German Chancellor Angela Merkel after he failed to secure safeguards that would have stopped European Union plans to police financial services in London, Europe’s trading hub.

In a clash that may reshape Europe’s balance of power, the euro users opted to enshrine closer fiscal union in a new treaty that leaves out the U.K. instead of amending EU treaties that date back to the 1950s. Nine non-euro members — Denmark, Poland, Bulgaria, Hungary, Sweden, the Czech Republic, Latvia, Lithuania and Romania — indicated they may follow suit after consulting with their national parliaments.

Twitter commentary on the issue ranges from “Well done, Cameron. You got your balls back!” to “Cameron protects City of London banking cronies! Again!” The New York Times calls the treaty a “significant defeat for Cameron.”

Mr. Sarkozy said that “David Cameron requested something we all considered unacceptable, a protocol in the treaty allowing the U.K. to be exempted for a certain number of financial regulations.” Mr. Cameron said, “What was on offer wasn’t in British interests, so I didn’t agree to it.” He conceded that there were risks with others going ahead to form a separate treaty, but added, “We will insist that the E.U. institutions, the court and the Commission work for all 27 nations of the E.U.”