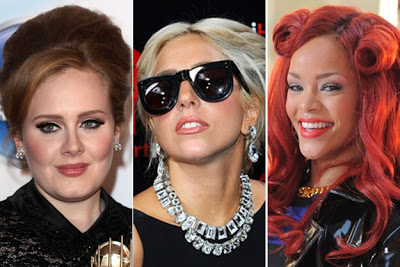 By weeks at #1 on Billboard’s Hot 100 singles chart, here are the longest-running chart toppers of the year. This year saw an unusual number of long-lasting #1 singles, hence a fewer number of songs reached the top overall.

The above ten tracks rode the top for a collective 45 weeks of the calendar year. Rihanna’s We Found Love is in its fifth week at this writing, but is out of contention for single of the year as the Billboard chart year officially ended on the last week of November. That leaves the 2011 championship slot safely to Adele’s Rolling In The Deep. Of slight interest, Bruno Mar’s Grenade went to number one on three non-consecutive weeks. Only a handful singles have ever done that.

Keep in mind that since the advent of Soundscan, Billboard tabulates the year-end charts strictly by sales/airplay and no longer do weekly chart positions play into it. However the weekly chart results continue to be a fairly accurate predictor of the annual rankings. Releases whose popularity straddles two chart years (i.e. Firework, We Found Love) tend to get screwed on the annual list.

Previous From The Mayor Of Troy, Michigan
Next Poor Kids Don’t Know How To Work