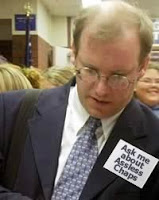 “Under Obama’s Navy, lesbians get the first traditional kiss; the sailor comes off the boat greeted by his spouse which is a woman usually, man-woman, woman-man, but now under Obama this political correctness we’re going to pretend that homosexuality belongs in the military. And actually Obama posted the photo of these two women kissing on his Flickr page which to me is another first—a president posting an indecent photo on his Flickr page because homosexual sex and homosexual practice is still indecent. It doesn’t matter what the trends say what the political correctness says, it matters what the truth is, and we go by the word of God and that’s indecent behavior. And to see our president glorifying it and saying this is one of his greatest accomplishments is really a sad day.” – Porno Pete LaBarbera, speaking on Christian radio. (Via – Right Wing Watch)