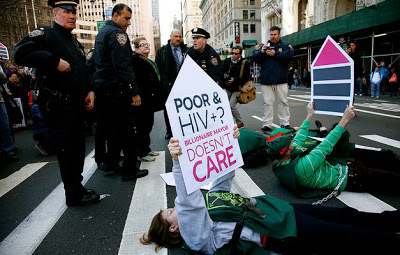 Thirteen AIDS activists were arrested in downtown Manhattan today in a joint protest organized by Housing Works, Occupy Wall Street, and others. Among their demands is the institution of an unprecedented tax on millionaires with the revenue specifically directed to fight HIV/AIDS.

In the tradition of the working-class hero of Sherwood Forest, the marchers and the 13 Robins were demanding the implementation of a Financial Transaction Tax on Wall Street and a New York State millionaires tax in order to fund the fight against AIDS here in New York and worldwide. New York City and the federal government have backed away from their commitment to fighting HIV/AIDS in dramatic ways during the past year. “It’s a lie when we’re told there isn’t enough money to fight AIDS,” said Felix Rivera-Pitre, a VOCAL-NY leader who is living with HIV/AIDS and currently in a homeless shelter. “The reality is that Wall Street crashed our economy, and now politicians are saying there’s less money for basic needs like healthcare and housing, or for keeping their promise to fund HIV/AIDS treatment overseas.”

View more photos on the Flickr stream of Housing Works.

UNRELATED: You may recall Felix Rivera-Pitre (quoted above) who made international news when he was sucker-punched on video by a member of the NYPD.