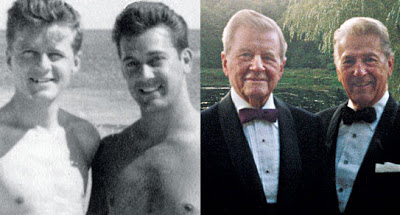 When the Columbia Library closed each night at ten, it was the custom of John Spofford Morgan, who was studying for a master’s in international affairs, to hop on the subway and head downtown to the New Verdi on West 72nd. Back then, there were two kinds of bars for gay men, he says: pickup joints and old-friends joints. The New Verdi was the latter, but it turned into the former when at around 10:30 on May 17, 1947, Louis Halsey walked in. “Love at first sight,” says Lou now. “Was it?” John wonders. “For me it was slower.” In any case, Lou and John spent the night together, just as they have spent most nights in the 64 years ensuing. Last month, they got married.