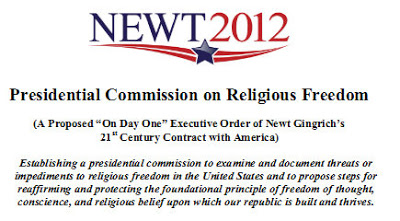 Gingrich Promises Presidential Commission On Ending The Separation Of Church/State Newt Gingrich has published a document vowing that “on Day One” of his presidency he will create a commission to investigate any attempt to enforce the separation of church and state. He also promises that he will thwart any attempt to stop the religious bullying of LGBT students. Effectively, Gingrich is saying that he endorses the right of Christians to express “their conscience” and harass, threaten, bully, and beat LGBT kids if God says they should.