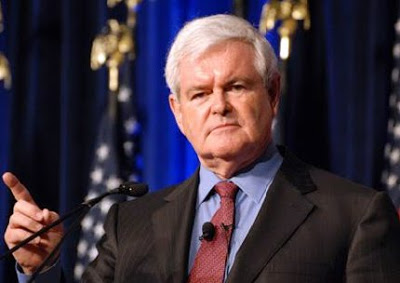 Gingrich: I Will Pack The Courts With Judges From Christianist Universities Continuing on his quest to reform America into a Christianist theocracy, Newt Gingrich says that as president he will appoint federal judges from extremist right-wing universities. Right Wing Watch has the quote:

You start looking at people of the caliber of [NOM founder] Robbie George of Princeton, you look at [Pat Robertson’s] Regent University, you look at [Dead Jerry Falwell’s] Liberty University, you start looking around and realizing there is a whole crop – [Gingrich employee] Vince Haley of University of Virginia graduate who is a deeply, deeply committed Christian who clearly understands these kinds of issues – I think people would be surprised that the Federalist Society has many members who agree that we need a balance of power between the three, not a judicial dictatorship.

Yup. Gingrich wants to appoint NOM’s Robert George, the Manhattan Declaration author who commands Americans to defy civil rights laws. As a federal judge. You can kiss this republic goodbye, should Gingrich ever take power.

RELATED: Gingrich vows to end the separation of church and state.

ALSO RELATED: Gingrich vows to arrest any judge who enforces the separation of church and state.

Previous Everything Is Unconstitutional!
Next Today’s Dumbass Lie From Trump