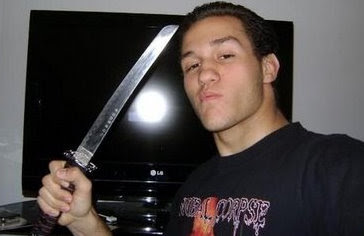 Teenaged murderer John Katehis has received the maximum sentence for the gruesome 2009 slaying of openly gay CBS newsman George Weber. The killer’s first trial resulted in a hung jury after the defense painted Weber as a kinky pedophile who trolled for young male prostitutes on Craigslist, where he met Katehis. Last month the jury in the second trial repeatedly heard the same claim but voted to convict. Paul Schindler has more about yesterday’s sentencing at Gay City News:

After a very brief statement in which he said he was “sorry” for killing George Weber and felt “regret” for the pain he caused the slain man’s family, John Katehis received the maximum sentence of 25 years-to-life in prison. Convicted by a Brooklyn jury on November 15 of second-degree murder, the 19-year-old Katehis opened his statement by saying, “As much as I’d like to, I can’t undo it.” After finishing his statement at the December 13 sentencing hearing, Katehis’ attorney, Jay Cohen, cited his client’s youth –– he was 16 when he killed Weber –– in asking the court for “compassion.”

After that, Judge Neil J. Firetog, without any comment, handed down the maximum sentence, under which Katehis must serve at least 25 years, less the two-plus years spent in jail since his arrest, before being eligible for parole. For a moment after receiving his sentence, Katehis kept his head facing forward, but as he was about to be led from the courtroom, he turned back toward the gallery, where his father Spiro sat with several young women, and showed a grin.

The prosecutor in the case pointed out that Katehis himself had sought out his meeting with Weber. Read the full report on Gay City News.