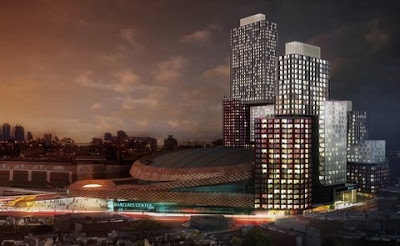 A highrise project above a new sports arena in Brooklyn will be built using modular housing units like those seen in mobile homes. At 32 stories, one of the buildings will be the tallest such structure in the world.

In New York City, the School Construction Authority has used the technology to build classrooms, and the Capsys Corporation, a modular builder based at the Brooklyn Navy Yard, has built prefabricated steel-frame housing up to seven stories tall in Brooklyn and on Long Island. Mr. Ratner said 60 percent of the construction would take place in a factory, where an estimated 190 workers would assemble roughly 950 steel-frame modules, each 14 feet by 35 feet, and outfit them with electric and plumbing lines, as well as with kitchen and bathroom pods. At the same time, on-site workers would build the foundation. The modules would be transported to the site, lifted into place by crane and bolted together. Steel bracing would rise with the stacked modules.