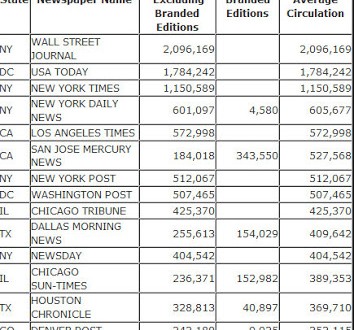 Digital circulation for The New York Times, which put in place a paid online model in the spring, more than tripled to 380,000. The Wall Street Journal was the only paper with a larger paid digital circulation, with more than 537,000. The Wall Street Journal remained the largest weekday newspaper when both print and digital subscriptions were included, with a total average circulation of just under 2.1 million. The New York Times retained its distinction as the largest Sunday paper at 1.6 million. (Weekday circulation for The Times was 1.2 million).