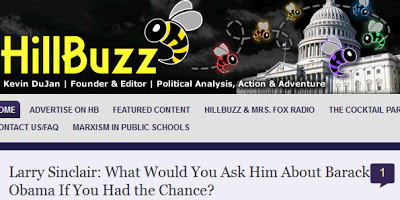 Next week Hillbuzz founder Kevin DuJan will host nutcase Larry Sinclair, who claims the president is a gay cocaine-using murderer. Or something. Sinclair is a multiple felon who has changed his name several times and who failed a lie detector test on his Obama claims. But none of that matters in homocon-land.