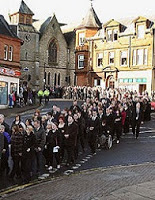 Hundreds of mourners turned out yesterday for the funeral of Stuart Walker, the young gay man found burned and tied to a lamppost in his Scotland village last month.

Many of the town’s 9000 inhabitants attended the service. Mr Walker’s sister, Julie called her brother the “life and soul of our family”. She said: “You were our ray of sunshine when you were here. And now you will forever be our brightest star, watching over us.” The day of Stuart’s death, 22 October, was described as “one of the darkest in Cumnock’s recent history” by the vicar, Reverend Patterson. Leona Lewis’ Footprints in the Sand was played during the procession, with 600 mourners following the hearse to the town cemetery.

An 18 year-old man has been charged with the murder.