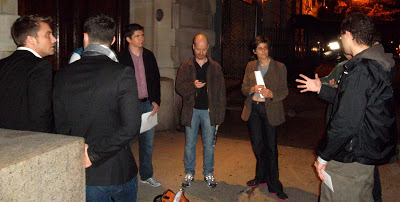 A spokesman for the Russian government has denounced the U.S. State Department for a statement made in opposition to St. Petersburg’s pending ban on all LGBT-related media and speech.

“We view with bewilderment the American side’s attempts to interfere, what’s more, publicly, in the lawmaking process,” foreign ministry representative for human rights, Konstantin Dolgov, told the Interfax news agency. He dismissed as “inappropriate” comments by the US State Department last week that it was “deeply concerned” by the bill, proposed by the ruling United Russia party at the legislature of the northwestern city of Saint Petersburg. The vaguely worded bill would introduce fines of up to 50,000 rubles ($1,598) for “public acts” promoting homosexuality, lesbianism, bisexuality and transgender identity. Gay activists warn that it could be used to ban any campaign for gay rights.

RELATED: Last night I attended a hastily called and disastrously organized protest at the Russian Consulate on Manhattan’s Upper East Side. I was first to arrive, but an hour after the scheduled start the ten or so who showed continued to chat amiably amongst themselves while the NYPD looked on with boredom. Meh. Of slight interest, former boy band member Lance Bass (far left) was there, but he came with a camera crew, presumably for his new reality show. Previous Herman Cain: I’m Might Quit
Next Billboard Of The Day