Quote Of The Day – Brian Brownshirt 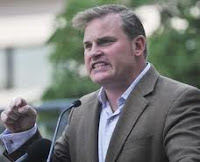 “They object to us using a photo of a crowd scene, which symbolizes the tens of thousands of New Hampshire voters who are part of our effort. They’re upset that the photo was not taken at a NOM rally. Seriously?! NOM using a common use photo in the public domain is considered a great scandal, yet they can redefine marriage—the most important social institution of society against the wishes of New Hampshire voters—and nobody is supposed to object? It’s as if the institution of marriage gets mugged, and they complain about speeding in the neighborhood when someone rushes it to the hospital!” – NOM president Brian Brownshirt, denouncing Rachel Maddow for calling out his hate group’s photo trickery.

NOTE: Brownshirt pointedly ignored the actual source of the story, Jeremy Hooper at Good As You, who has an internal NOM email directive that his blog is never to be mentioned. NOM never mentions JMG either, although they’ve blocked me from subscribing to their YouTube channel, their Twitter account, and their blog. However they are NOT above totally stealing my original video and uploading it to their channel as their own.