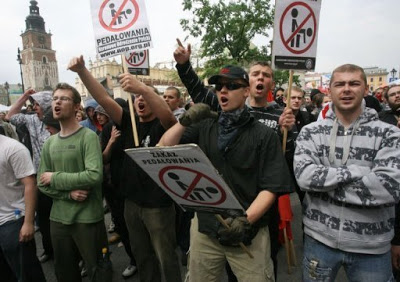 In a little-noticed decision at the end of October, a court allowed the small National Rebirth of Poland (NOP) party to register two symbols. One was the Celtic cross, used by far-right movements internationally, while the other was a stylized illustration of gay sex with a bar through it. The NOP trumpeted the court ruling on its website earlier this week, saying it capped a two-year legal battle. Grzegorz Schetyna, a senior player in Poland’s ruling centrist Civic Platform, accused the judge who made the ruling of failing in his duties. “Such symbols are unacceptable,” he told the station Radio Zet. The NOP turns out regularly to oppose gay rights rallies in Poland.

RELATED: Last summer friends of mine were attacked by neo-Nazi and Catholic extremists while attending EuroPride in Warsaw. Over 2000 Polish riot police were deployed to protect those attending the parade.