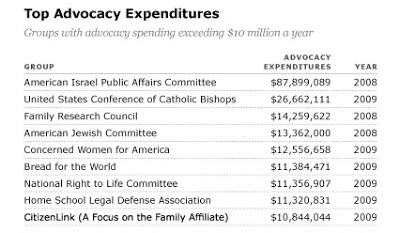 Virulently anti-gay Christian groups figure prominently in the Pew Forum’s ranking of spending for religious advocacy. Roll Call notes that NOM more than doubled its spending the year after the passage of Prop 8.

Keep in mind that all of the above groups maintain separate arms for “political advocacy” and other spending. For example, the total 2010 expenditure for Focus On The Family alone was $138,000,000. That’s about two times the combined annual budgets of the ten largest LGBT rights groups.